The Garlands Play Readers Present: A Passion for Story-telling, Entertaining and Good Times 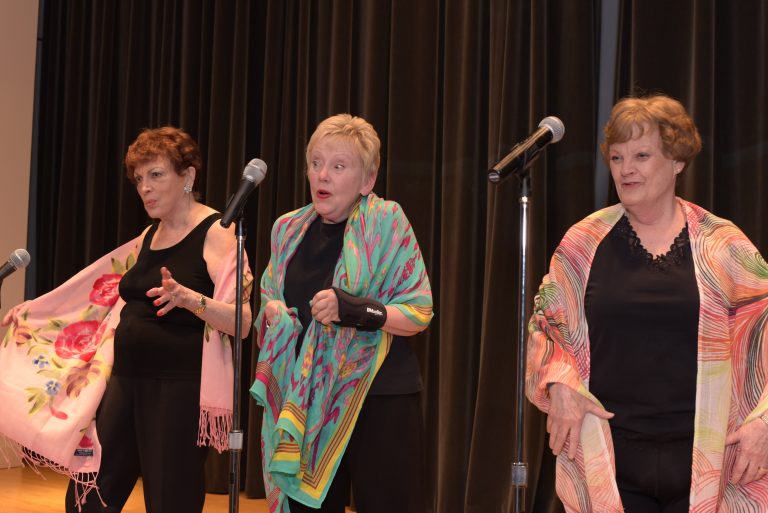 The Garlands Play Readers, a troupe of 20+ thespians, all of whom are over the age of 75 and live at the Barrington retirement community, act, lip-sync and dance their way through dramas, sketch comedy and one-acts that are performed live in The Garlands’ own 200-seat Performing Arts Center. Started in 2007 by the late Dr. George Flint, a surgeon turned actor and producer in retirement, and his wife Vally, the troupe has rehearsed and performed over 15 shows together.

Most recently the Garlands Play Readers took audiences back to the “good ole days” with their own variety show, “Radio Days of the ‘30s, ‘40s and ‘50s.” Nearly 200 neighbors, friends and family, enjoyed seeing favorite old time radio commercials “live and in Technicolor!” while The Garlands own Fred Astaire and Ginger Rogers danced the Foxtrot, Johnny Carson brought on the laughs and guest appearances from the Andrew Sisters and The Three Tenors brought back fond memories.

Many of the troupe’s members dabbled in the performing arts in their high school and college years, while others are new to the stage.  All share a passion for entertaining and having a blast while rehearsing and putting on a show.

Take for example, Gary Karlin, 83, a founding member who, along with his wife Cheryl, produced and directed the group for several years. He is a self-professed “frustrated actor” who got a taste for show business as a kid when he worked at the Chez Paree nightclub in Chicago in the mid 1950s as a valet and gofer. That’s where he learned to do the soft shoe and fantasized about being a stand-up comic. Instead, Karlin eventually started his own financial planning firm and worked on the fringes of the entertainment industry as an advisor to entertainers Bob Hope and Louis Armstrong among others. “I loved being a part of their world,” he says. “Turns out that there are a lot of people here at The Garlands who are frustrated actors—now is our chance!”

“People who choose to engage in theatrical pursuits with The Garlands Play Readers share the common bonds of really loving the opportunity to challenge their abilities, meet new people and enjoy the rehearsal and performance experience,” says Director Nathaniel Szkil, Lifestyle Specialist at the community. “The theater offers our members an ideal opportunity to display their acting, singing and dramatic talents while inspiring others to get involved. Our shows are often unpredictable, but they are always well received.”

Szkil channels his high school tech crew experience working behind the spotlight, backstage and as a stage manager to help organize and orchestrate the group. “I try to guide and provide structure for our actors, but they all have ideas and opinions as well—it really is a team effort,” says Szkil who this year brought in an adjunct acting instructor with Harper College to help troupe members with character development and provide coaching tips.

It takes a lot of practice. Scene mates rehearse on their own, and the full cast rehearses the big Broadway opening and closing numbers weekly “until we get it right” according to Karlin, who counts roles as Domingo from The Three Tenors and Pickering from My Fair Lady (wife Cheryl played the part of Liza Doolittle) among his favorites. “I’m a singer who has no voice, but I do it anyway,” quips Karlin who lip-syncs his part with gusto. “After the show, I feel like a Hollywood star around here! Everyone stops me in the hallway and asks ‘When are you going to do it again?’ It’s a lot of fun!”

In addition to bragging rights, engaging in theatrical pursuits provides a fun social outlet and also helps stimulate creativity beyond one’s normal comfort level by challenging the mind through memorizing lines and song lyrics (some are memorized while others are read or lip-synced), learning dance steps and working backstage. “Some of our actors are dealing with illness or physical constraints,” notes Karlin, “but you get us on stage, and we come alive!”

This summer the group will meet to review the video (and bloopers) of their spring performance and consider options for their next endeavor, plus many members will head to Chicago to see the touring production of Hamilton together. Meanwhile Szkil is preparing to take his “show on the road” as a guest speaker at the International Council on Active Aging’s annual conference where he will share his expertise in creating theatrical experiences with older adults with other senior living providers.

“Theater is an ideal outlet for older adults because you are able to accommodate so many different ability levels and talents,” says Szkil. He says that even assisted devises that can be associated with aging become an extension of the actor and can help set the scene. “We have been known to cast an actor who uses a walker as the emcee who then delivers his lines standing with support from a podium, and we have a member with MS who dances the chorus line from his wheelchair,” says Szkil. He has also added lights and a siren to an actor’s wheelchair who was playing the part of a police officer and a string of flowers to a walker for an 80-year-old actor who was playing the part of a young girl. Plus, he says, “In theater there are many behind-the-scenes roles, like sewing costumes, securing props, backstage support, lights, and, of course, the audience–everyone gets involved!”

The Garlands is a unique community for people ages 55 and older that offers residents an uncompromising lifestyle in a resort setting with unprecedented amenities and services.