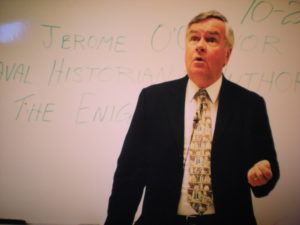 Author and historian Jerome M. O’Connor shares insights from his upcoming book which observes the 75th anniversary of the end of World War II in 2020. Indispensable to the re-telling is that he personally visited all sites. Explore the British airfields, including pilot and movie star Jimmy Stewart’s base, where the Eighth Air Force launched attacks against Germany. See Berlin then and now. Enter the Berlin house where, over breakfast, the “final solution” to murder Europe’s Jews was decided. View the London mansion where 63 captured German generals lived in near luxury – or so they thought.