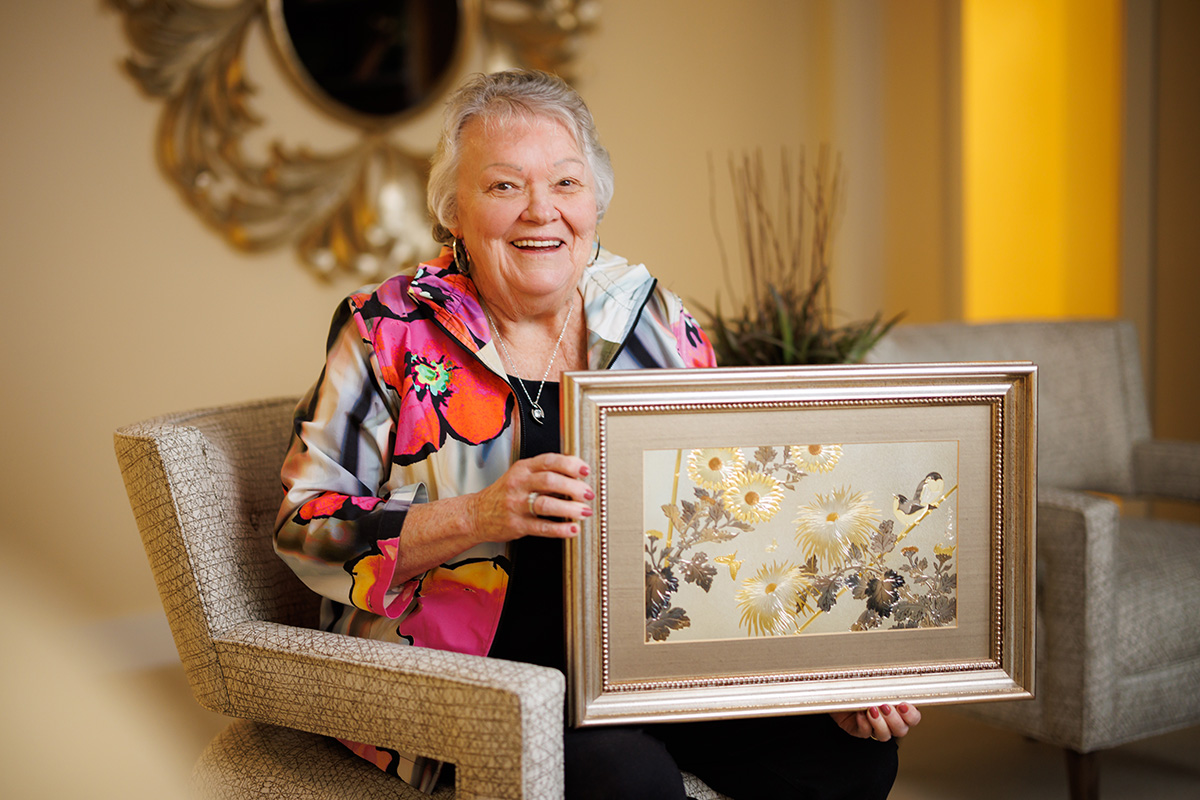 Linda Hughes displays the Chokin artwork she designed and imported from Japan in her two-bedroom home at The Garlands, where she enjoys new friends, attends events, and organizes weekly Bocce Ball games.

Struck by lightning, Garlands Member Linda Hughes should have wound up in the hospital . . . or worse. Instead, the shocking experience landed her on The Oprah Winfrey Show!

Ironically, it wasn’t Linda’s first Oprah interview – the other television appearances were due to her “electrifying” career as an entrepreneur and pioneering advocate for women in business.

Growing up, Linda and her twin brother spent their childhood in their grandparent’s plumbing-free, four-room house. Her father abandoned the family, leaving behind crippling debt and forcing Linda and her brother to take odd jobs to help pay the bills.

Fast forward several years, her brother received family support to attend college. Linda did not. “I believe this unfair, sexist situation planted the seeds that would grow throughout my life,” recalls Linda. “I would not be left behind, I would not be poor, and I believed women deserved equality.”

Linda wasted no time in pursing her education on her own. She pocketed scholarship money, hitched a ride to Western Illinois University, earned a teaching degree, went on to become a guidance counselor, and wrote her school district’s first sex education curriculum – a scandalous proposition at the time.

After a few summers filled with travel and temp jobs, Linda met her husband of 47 years while transcribing dictation in a steno pool at American Colloid (“John never met a comma he didn’t like!”).

Their life together – featuring John’s career, two children, multiple homes, significant travel, and four grandchildren – is a remarkable legacy, but Linda’s life as a working mother is a great story in and of itself.

The Art of Chokin

A random gift of engraved, gilded metal artwork from Japan that she dubbed “Chokin” inspired Linda’s import business, Lin-Art Ltd., which grew from a cottage industry to over a million dollars in sales in just four years.

Eventually, Lin-Art moved out of the family’s basement and diversified. From introducing new giftware products to cornering the market on rubber bands to engraving custom crystal, Linda’s work in what was, at the time, a “man’s world” led to substantial profits, national headlines, and a seat at the table with The National Association of Women Business Owners (NAWBO).

With NAWBO, Linda earned “Business Owner of the Year” recognition, became an outspoken advocate for female entrepreneurship, served as a delegate to a White House Conference on Small Business, and testified before Congress.

“At the time I started my business, women couldn’t get a loan without a man’s signature,” scoffs Linda. “I testified about a friend who had to have her 18-year-old son sign for her.”

Linda and her colleagues’ strategies were effective. The White House Conference supported 22 of NAWBO’s 25-point agenda, including improving access to capital, and many of their points became law. Today many women entrepreneurs are grateful for Linda’s, NAWBO’s, and other women’s pioneering efforts.